The Lover You Can't Quit

That would be World of Warcraft. It's bad for you; it teases you with possibilities and often fails to deliver. It promises to change, and then it doesn't. And yet... you break up to make up. =sigh= Yeah I'm back. I came back at the last expansion; quit again, and now I'm back for the next one. Doing the pre-expansion gear grind events, even. However, a lot of Horde folks are troubled by the narrative driving the Horde story for this. Specifically, Sylvannas is doing some pretty straight up evil stuff. I think though that the devs have dropped a hint at some internal struggle between Saurfang and Sylvannas. That could be cool. But this will only play if there's a comparable rift on the Alliance side. OMG look at me all into this crap. Anyhow, here's a screen cap from the cut scene. Yeah, that's right, we just burned down the Teldrassil tree. This is going to be a Horde v Alliance expansion. They're coming for the Undercity.


For about a week I was able to play on a rogue Vanilla WoW server some folks put up. There were several thousand people playing. It was so cool. I'd forgotten what it was like before Blizz made everything a face roll. Anyhow, tl;dr, Blizzard shut it down by threatening legal action.

So I cancelled my sub to WoW. Fuck them. 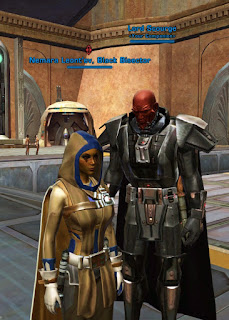 I had been playing the free-to-play part of SWTOR for a few months and was digging it for the same reason we all dug Dragon Age. Interactive story. I decided to sub there. I'm raising one of each class, both Dark and Light Side.

Best story arcs are the Jedi Knight and the Imperial Agent. I have to say that agent story arc is amazing! I was actually rather hohum about the knight until this happened. This is my newest companion, picked up at level 45. Yup, that's right. He's a Sith (and obviously betraying his Emperor)!

I'm really enjoying the game play, and the art is lovely. (I leave you with a shot from the planet Ilum, below.

Happy Festivus from Our Garrison to Yours 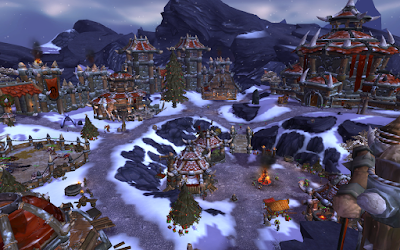